“Near Misses” in the Medical Community

It’s no secret that the medical profession is high-pressure. With rotations in excess of 24 hours, understaffing and an endless rush to treat the next patient, healthcare employees are often put in predicaments that can lead to a medical mistake.

According to one brave doctor who chose to share her story of a “near miss”, medical errors will continue to happen unless doctors forge an open discussion in the community. Danielle Ofri’s open, honest op-ed in The New York Times echos a call to action that could improve the American healthcare industry: 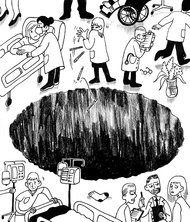 IT was probably our eighth or ninth admission that day, but my intern and I had given up counting. I was midway through my medical residency, already a master of efficiency. You had to be, or you’d never keep up. This one was a classic eye-roller: a nursing home patient with dementia, sent to the emergency room for an altered mental status. When you were juggling patients with acute heart failure and rampant infections, it was hard to get worked up over a demented nonagenarian who was looking a little more demented.

The trick to surviving was to shuttle patients to another area of the hospital as quickly as possible. This patient was a perfect candidate for the intermediate care unit, a holding station for patients with no active medical issues who were awaiting discharge. First we just had to rule out any treatable medical conditions — get the labs, head CT scan and chest X-ray. But the docs at the intermediate ward left at 5 p.m. and it was 4:45. I quickly scanned through the labs, called the ward’s doctor and ran through the case — demented patient, still demented, return to nursing home tomorrow.

I remember the doctor’s voice so clearly: “You’re sure the labs and everything are normal?” Yes, yes, I said, everything is fine. She hesitated, then said O.K. The intern and I high-fived each other, and bolted back to our other admissions.

The next afternoon the doctor tracked me down. Without mincing words, she told me that she’d been called overnight by the radiologist; the patient’s head CT showed an intracranial bleed. The patient was now with the neurosurgeons, getting the blood drained from inside her skull.

How had I let my craze to decrease my patient load overtake proper medical care? I had failed to check the head CT! I was appalled at myself, mortified by my negligence. I stumbled through the rest of the day, an acrid mix of shame and guilt churning inside me.

I never told anyone about my lapse — not my intern, not my attending physician, certainly not the patient’s family. I tried to rationalize it: the radiologist had caught the bleeding, and no additional harm had come to the patient.

But what if I had discharged the patient? What if I had started her on a medication like aspirin that could have worsened the bleeding? My error could easily have led to a fatal outcome. The patient was simply lucky.

In hospital lingo, this was a “near miss.” But a near miss is still an error, just one in which backup systems, oversight or sheer luck prevent harm.

A near miss, like any error, is an opportunity to examine how mistakes are made and what changes might prevent them. Yet we have no idea how many near misses there are. Many experts feel that near-miss errors dwarf the number of known errors, a number that is already too high for comfort. (According to a 2006 report, medication errors alone injure an estimated 1.5 million patients a year.)

But the instinct for most medical professionals is to keep these shameful mistakes to ourselves. For the past two years I’ve been interviewing doctors about the emotional experiences that have molded them. Though I was interested in the full range of emotions, nearly every single one brought up a medical error that they had been party to during their careers; many of them had never spoken about it before. The shame of their errors — including the near misses — was potent, even decades later.

Much attention has been paid to reducing medical errors. Electronic prescriptions avoid penmanship mistakes. Bar codes on wristbands ensure that medications go to the right patient. Checklists and timeouts before surgeries help prevent common oversights. But we can stop only the errors we know about. There remains a black hole of near misses, of uncharted errors — a black hole of shame that prevents caregivers from coming forward.

Medical culture is less overtly punitive than it used to be, but the guilt and blame are internalized, often savagely, by its practitioners. How can we ease the shame and help doctors and nurses come forward with their near misses?

This is not the type of thing we can orchestrate with a quality-improvement initiative and a zippy slogan. It has to come from inside the medical world, and it helps to start at the top.

When the chief of medicine or the director of nursing stands up and talks about his or her biggest medical error, it will get noticed by the rank and file. Hearing how a person in authority handled the emotional fallout and the feelings of incompetence may give others the courage to come forward. Until we attend to the culture of shame that surrounds medical error, we will be only nipping at the edges of one of the greatest threats to our patients’ health.

Danielle Ofri, an associate professor at New York University School of Medicine, is the editor of the Bellevue Literary Review and the author of “What Doctors Feel: How Emotions Affect the Practice of Medicine.”

A version of this op-ed appeared in print on May 29, 2013, on page A23 of the New York edition with the headline: My Near Miss.